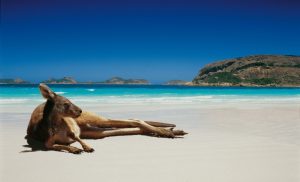 Australia is a continent in the southern hemisphere, a former British colony where criminals and convicts were exiled. Nowadays – a prosperous, developed state, in terms of the standard of living, is ahead of many European countries. The diversity of the most beautiful landscapes, the richness of flora and fauna, extreme tourism, the familiarity with the aboriginal culture and beach holidays are what attract tourists from all over the world to Australia.
We offer not just tours to Australia from Kiev, but fascinating adventures – a rare chance to join the lives of people who “go headfirst.” The author of the trip, Julia Nikityuk, carefully studied various tourist sites and local wonders in order to present a very interesting route to your court:
– walks in protected areas and national parks, visiting aquariums, sightseeing, sightseeing tours and cruises;
– Observation of animals and birds: plush koalas, charming penguins and kangaroos, frightening crocodiles, sharks and other inhabitants of the continent;
– diving with a mask on the Great Barrier Reef;
– communication with the aborigines;
– walking tours to the Blue Mountains and rainforests.
And at the end of the trip your collection of photos will be supplemented with high-quality and impressive frames.
Australia – a country of paradoxes
Australia is in many ways unique. The rainforests encircling the continent in the north are replaced by arid deserts in the central regions and the comfortable Mediterranean climate of the southwest. In addition, the status of the “country opposite” obliges to surprise and delight visiting travelers. What only is an inverted moon, the sun, moving from right to left and unfamiliar stars in the sky!
Animal world
Here are preserved rare species of animals and birds, which almost did not change their appearance over millions of years: kangaroos, koalas, platypuses, echidnas, wombats, emus, cockatoo, giant cuttlefish.
You feed the amazing kangaroos, whose powerful paws can cripple a predator, and stroke the soft trusting koalas that live in eucalyptus forests. In the great Sydney Oceanarium you will meet with the inhabitants of the ocean depths, and during a cruise on the Gulf of crocodiles you will be terrified by the strength of these toothed predators. Diving with a mask at the coral reef will open to you the colorful underwater world.
And the parade of penguins on Phillip Island! After sunset, small amusing birds, gathering in flocks at the edge of the surf, make their way along the sand and stones to hide in their burrows. This is a very touching sight, attracting thousands of tourists every year. Maybe during the day you will be able to see the nesting places of seabirds, fluffy penguins, wombats or emus.
The expanses of Australia are endless and immense. No wonder, because the country occupies a whole mainland!
Be sure to climb in the Blue Mountains to admire the wooded slopes, immersed in a bluish haze. Let’s walk along the hidden paths, breathing in the scent of eucalyptus and wet earth, and also look at the Three Sisters rocky peaks and, perhaps, unravel the secret of their mythical origin.
The snow-white cockatoo is found in the foothills of the Dandenong, and the old subtropical forest strikes with its grandeur and wild beauty, like the forests of the Giants (trees reach a hundred meters in height).
The iconic natural sights are located along the Great Ocean Road in Victoria: the Twelve Apostles, the Loch Ard Gorge, the London Arch and other scenic beauties. Rocky waterfalls, crystal clear lakes and rain forests await you in Kuranda and on the island of Tasmania.
Of course, you can not ignore the Australian city – lively Sydney with its famous Opera House, Melbourne, the cultural center of Australia, the resort Port Douglas.
Feel like a seasoned gold miner in the town of Sovereign Hill, where the atmosphere of the era of the 19th century gold rush reigns, and you will also look into the gloomy cells of the convict prison in Port Arthur.
Native people of Australia will tell about their traditions – in the village of Tyapukai you will be greeted with a bright dance show, and you will surely feel the indescribable flavor of the local culture.