Hallstatt – a paradise of Austria 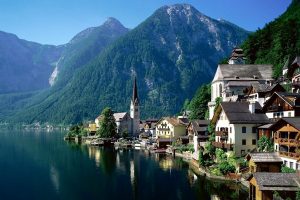 In Upper Austria, in the Salzkammergut region, on the banks of a picturesque river, lies the small town of Hallstatt. Surrounds this town is wonderful for its beauty Dachstein mountain range. For its unique natural beauty, this region in 1997 was listed as a cultural heritage of global importance.
Very often, tourists who are offered to visit this small town ask themselves the question – “And what can be interesting to see in a town whose population does not exceed even thousands of people?”. But many of those who visited this unique place sometimes do not find the words to convey the impressions that they had to go through.
Road to Hallstatt. Getting to Hallstatt is best from Salzburg. For an hour and a half you can easily get here. There are trains and buses to Hallstatt from Salzburg. If your route starts from the capital of Austria, Vienna, you can reach the fast train in four hours. True, the train stops a little further away from Hallstatt, but when you get off at this stop, you will be pleasantly surprised, as there is a free bus from here to town. The terminus of the bus is located on the shore of the picturesque Lake Hallstatterese. From here, by ferry or small boat, as in ancient times, you can cross into the town.
Sights of the town. Almost all the tourists who visited Hallstatt, say that most of all they were struck not by the ancient historical values ​​and other sights, but by the feeling of unprecedented tranquility and isolation from the civilized world that reigns in this town. The town of Hallstatt, with its toy-like houses that nestled on the mountainside, the celestial color of the lake with floating swans, reflected in the water surface of the clouds, create for every visitor a sense of tranquility, protection from all hardships of life, paradise and peace and home comfort.
As in all cities, the people of Hallstatt are concerned about the lack of living places. Houses in the city are located in several tiers. A characteristic is the fact that the second line of houses begins right from the level of the roofs of the first level. Therefore, the residents of the lower line, when they are visiting the neighbors from the second line, can come from their yard to their house on the second floor without any problems.
During the visit to Hallstatt, many tourists are surprised by a strange local tradition. It is caused by space saving. The essence of the tradition is that they bury their dead as all ordinary people. But ten years later, they dig them out, and expose the remains for several weeks in the sun. After some time, the remains acquire the characteristic color of ivory. After that they are sent for storage in a special nest box – Bin House. The ossuary is located on the first tier of the chapel of St. Michael’s Church. And in the tomb, which was freed, they bury the next, again deceased dead man.
Before you send the remains to the bone they are painted by a local artist. The skull is painted with a floral ornament, crosses, leaves, the date of birth and death is displayed. Today there are more than 1200 painted skulls in the nave. This tradition originated in the beginning of the 17th century. Just at that time, a local artist, before sending the remains to the bone, began to paint the skulls. A strange tradition is still alive.
The city consists of only two streets, of which only one is accessible by car. On the very shore of the lake is the Lutheran Evangelical Church, which was built in the middle of the XIX century. Going on a walk along the narrow streets of the city, you will surely stumble upon this old church, pointed in the ancient Romanesque style. From this place a magnificent view of the surroundings of the town.
Inside the church are unique works of world religious culture. Here is an ancient altar, which consists of three parts. If you open the doors of the altar, you can see the scenes of the Nativity of Jesus Christ and the adoration of the Magi.
Visiting Hallstatt is best in the summer, in the morning and evening. In these hours on the streets of the city is quiet and calm, there are no fussy crowds of tourists. Usually tourist groups come here for a few hours to visit local sights, and by eight o’clock in the evening they are already leaving for the place of their overnight stay.
Since May 1628, the locals celebrate the feast of the Body of Christ. Then you can watch the festive boat procession, decorated with flowers, which solemnly moves across the lake.
If you wish, you can take a tour of the salt mine mining mines, explore the local museum, visit historical excavations, and visit the famous Dachstein caves. Of particular interest is the Rudolfstrom tower. It was built at the end of the XIII century by King Albert I, it was intended to protect the miners and their families from various attacks. Today here, in this tower, you can admire the remnants of the interior of past times and relax before a trip to the salt mines.